If you're up for a bit of an adventure, get on Thurmond-McKendree Rd (CD25) from Thurmond, and head east for about 10 miles.  The road does a real sharp turn to the right after it heads inland from the river.  Right at the apex of the curve is Dowdy Creek.

I went down this road on 19 May 2015.  I had spoken to a ranger and they told me it was not being maintained beyond Thayer.  That was abundantly clear when I got to the Slater Creek crossing.  The road had such deep and wide holes in it, and they were so close together, that I dared not venture forward.  Looking down the road as far as I could see, gave me a sense of forboding.  I have a relatively high clearance 4WD truck and I had visions of being swallowed up in the very first hole.  My advise, if you want to see this fall is to paddle or hike.

There is a river access at Thayer if you want to paddle upstream, or you can put in at Prince, but you can also walk the CR 25 for three miles from Slater Creek to Dowdy Creek.  You can also access CR25 from the other direction beginning at Prince.  It's about 3 miles as well.  No matter which way you go in, don't drive anything that's not high clearance, and I would not recommend anything that isn't 4WD.

Further information from this wiki page.

"Dowdy Falls is among the most spectacular falls in West Virginia, though also one of the least accessible. Near the mouth of Dowdy Creek on New River, the falls drop 50 feet over a first overhanging ledge, then divide in two and drop another 40 feet over a lower overhanging ledge. Access to the falls is safely limited to approaching the falls by kayak or whitewater raft from the mouth of Dowdy Creek on New River then following the stream through a railroad tunnel. Hikers may descend a steep unmarked trail along the side of the gorge from Thurmond-McKendree Road (CR-25) below Dowdy Bluff. Though within national parkland, the park service limits publicizing the falls because of the dangerous access. Visitors should use extreme caution and avoid private property, which includes the right-of-way of the (active) CSX rail line."

Photo courtesy of Adam Lewis. Thanks a bunch Adam and nice shot. 8-8-15 - Recently a fellow Facebooker on the West Virginia Waterfalls group posted some shots and offered a trip report of his successful trek to this falls.

Here's what David had to say about the access from the Prince end of McKendree Rd.  Thanks for the update, David.

"I only got to the substation before deciding it would probably be worse further on, so I parked and walked the three miles. Funny thing is, after about 1/2 mile the road became much better, all the way to Dowdy Creek. The late afternoon sun was horrendous so I didn't take any pictures. But I figured that since I would be close by, I'd be able to drive there in the morning and not lose too much of the day. And that's what I did, and got in some good shooting before the morning fog burned off.

After the summit over Stretcher Neck, the only hazards are some mudholes; no rocky ledges or protruding boulders. I don't think I'd try it in a sedan, but a car with moderately high clearance, like the Outback, should be OK.

Rick, you may also be interested that I found a way down to the falls that is easy-peasey, as an alternative to the path that I have seen cited in web descriptions (which I never did find anyway!) Instead of going down the very steep north side of the Dowdy Creek ravine, I discovered a series of ramps (no doubt old roads) starting from the south side. These switchback down to right above the south side of the upper falls, after which there is just a short scramble down the slope to the base of the falls. There was a faint but followable path, indicating that others have used this route. It may be more environmentally friendly than the north-side path, which I gather runs straight down the slope." 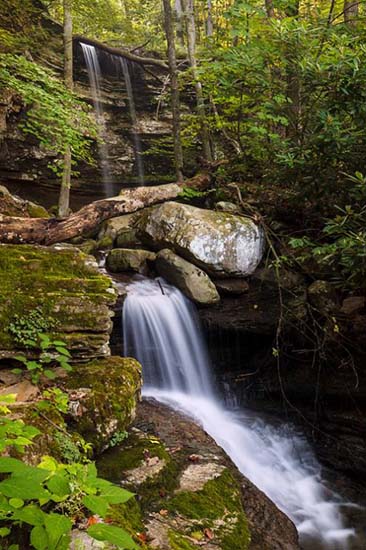 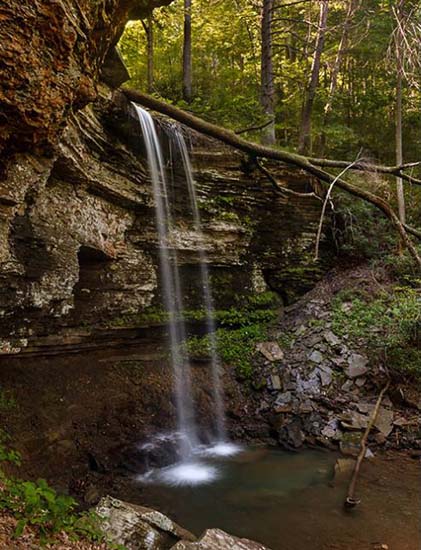 In a post from the West Virginia Waterfalls Facebook group, on 17 July 2016, Fred Wolfe had this to say:

I went to Dowdy Creek yesterday. Over the six years since I was last there the road has continued to deteriorate. The recent hard rains have made the road almost impassable. At multiple places trees have fallen over the road but it was our good luck that someone had already gone through with a chain saw. In one place the road has started to slip down the hill and when that's gone it's all over. It's unlikely I'll ever go over that road again unless with someone who has a really rugged, high axle vehicle and even then I'd not venture there without a chain saw or at least an axe. If I visit Dowdy Creek again I'll likely walk down from Prince; it's only two miles. The lower fall is chock full of trees and debris and is quite unattractive. I did not bother to move up to the big fall. I was not down that way for waterfalls anyway and was just checking. At one place in the road we had to move rocks and stuff before proceeding. Rock slides and mud slides will continue on for sure. I'm finally at a point to caution anyone to not go there by road.